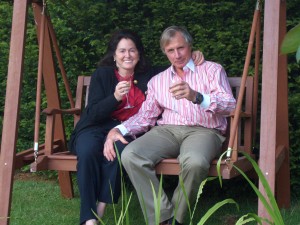 Poppy Cooksey originally trained as an accountant, but always leaned more towards the Arts, and following the completion of a  PhD in Fine Arts at St Andrews University, she opted to retrain to become a picture restorer. Her thesis  on the Life and Work of the Scottish painter Alexander Nasmyth (1758-1840) was published in 1990,  the year she established her own restoration business in London, working as well with re-liners, guilders and framers to provide a complete service to the art world. For many years, as well as bringing up her family,  she worked as an unpaid a charity fundraiser and organised  events for the RNLI, including a £5m project to support all 221 Coxwains around the coast. She raised funds to build a hospice for terminally sick children, and another for cancer patients, and worked on numerous other one off cancer events. In 1995 she was invited to become a Deputy Lieutenant. Following this work she was elected a Freeman of the City of London in 2000.  She became a member of the Guild of Freemen of the City of London and was soon invited to join the Court, and in 2003 was awarded an OBE for her charitable work. In 2015/16 she became Master of the Guild of Freemen of the City of London, and she remains on the Court. Alongside all this, taking up fencing at school, from the age of 16 Poppy was an international fencer, and continues her lifetime passion to this day. In 2004 she set up a B&B in the Cotswolds as a retirement project. Nowadays life is a little more gentle, and revolves around the B&B, and its wonderful guests who come from all over the world, and the precious children and grandchildren.

Graham Paul was born into the Leon Paul dynasty of makers and purveyors of fencing equipment. Preferring a scientific life, he studied mechanical engineering, and following his degree and  PhD at Imperial College, he taught for some 30 years first there and then at King’s College in London, enabling him to  continue a formidable fencing career.  Always curious, and something of an inventor, his first success came with his creation of the modern cat flap, when only the resident cat could enter and exit its home thanks to a chip in its collar. This was inspired one day when a stray cat wandered into his house  and soiled his fencing equipment!  While still at King’s, more recently he carried out important fundamental research on the operation of breathing machines.  Having retired from teaching, and we came to Uplands, he soon spotted an opportunity to develop a business making flight data recorders for gliders. He glides whenever he can at the Shenington Gliding Club nearby, and is also an instructor. He fences still, plays tennis in the village,  he loves skiing, plays squash when time permits, and is truly the embodiment of Action Man. For many years he served on the  Board of British Fencing, and now is very active in the running of British Veteran Fencing (over 45). His amazing practical skills honed as a youngster growing up in a factory making foils and masks and all necessary equipment for the modern fencer, and his engineering background keep everything running smoothly, and at home and there is practically nothing he can’t mend, nor problem he can’t solve.

Both Poppy and Graham have been Olympic fencers, are still active on the veteran circuit, and both are recent and frequent world and European  Champions. They love chatting to guests, hearing about a myriad of different lives, and unwinding from the day’s work over a glass of wine! Poppy was taught to cook at home by her brilliant and capable mother while watching, perched  on the Aga hotplate, and later attended a course at the Cordon Bleu School in Ascot. She has received many accolades for her creative cuisine and loves making delicious meals for her guests. Her grandchildren are just the same, watching and learning, becoming great little cooks themselves. She also loves teaching them to paint – and how quickly they learn!

Growing up at Barton House, in Barton-on-the-Heath, not far from Uplands, Poppy has plenty of local knowledge. She and Graham delight in helping guests plan their days, and will happily assist with organising garden tours, bike hire, horse riding, camel riding (yes!) near Halford,  a game of tennis, or croquet, clay pigeon shooting at Edgehill, walks in the vicinity, booking restaurants or theatre tickets, or downloading opening times of the many places to visit in the Cotswolds listed on this website under Things to do.

We make every effort to be as eco-friendly as we are able. Read More